Orlando, Fla – The nurse who developed the groundbreaking “preemie pacifiers” is asking the American Academy of Neonatal Nursing to make sure more babies to have access them. Harriet Miller, Ph.D, ARNP, is a nurse in the neonatal intensive care unit (NICU) at Winnie Palmer Hospital for Women and Babies in Orlando. After years of working around preemies in the  world’s largest NICU under one roof, she developed the special pacifier after noticing that the tiniest of her patients in the NICU did not have a voice.

“I could see everything that looked like crying. They were fidgeting, there were tears streaming down their faces and it was obvious they were upset, but these little babies just couldn’t make a sound,” said Miller.

Normally when a baby cries, whether it’s because they’re tired, scared or in pain, a pacifier will calm them down almost instantly. The problem with preemies is, they aren’t like normal babies.  “Most of them are intubated, which means they have tubes running down their throats to help them breathe and eat,” said Miller. “Those tubes make it impossible for the babies’ mouths to get suction on a normal pacifier, so as soon as you would put one in, it would fall right back out,” she said.

Unable to bear the thought that these tiny babies couldn’t find comfort, Miller invented a modified pacifier specifically for preemies. The nipple is smaller, the flanges are pliable and they are made with a small groove cut into the side, so they can sit next to the tubes in the baby’s mouth. With these specially modified pacifiers preemies can get suction and the satisfaction that comes with it.

Today the pacifiers are available in most NICUs across the country. However, they are not available in other areas where intubated babies are treated, such as emergency rooms, ambulances and helicopters. Miller is now asking the American Academy of Neonatal Nursing to help make these special pacifiers available anywhere a baby might be intubated, so that these tiny patients can be soothed during emergency care.

In a study conducted by Miller at Orlando Health’s Center for Nursing Research, entitled “Effect of Nonnutritive Sucking and Sucrose-Induced Analgesia on Heart Rate, Oxygen Saturation, and Pain Behaviors in Ventilated Neonates,” she found that when preemies use this modified pacifier they are much calmer and show actual health benefits.

To see what kind of difference they make, Miller tested the pacifiers on 14 premature babies in the NICU where she works. “We have to draw blood quite often on these little babies through heel sticks,” she said.  “So, we measured their heart rates, blood oxygen levels and rated their pain index with and without the pacifiers.”

When they were allowed to use the pacifier for comfort, the heart rates of the preemies went down.  Their blood oxygen levels went up, which means they weren’t experiencing nearly as much stress, and their pain index dropped.1

It didn’t take hard facts to convince Amber Eady the preemie pacifier worked. In the spring of 2014 she had premature twins, both of whom were treated in the NICU at Winnie Palmer Hospital for Women and Babies.

One of her daughters got to go home earlier than the other and was able to use a normal pacifier, the other spent several more weeks in the NICU, where she was given one of the preemie pacifiers developed by nurse Miller.

“I love the invention,” said Eady. “It’s almost like my baby knows that somebody heard her cries somehow. You put that pacifier in her mouth and she just calms back down,” she said.

Eady says she is grateful to Miller for seeing a need and doing something about it. “Anybody who would make something like that to comfort these babies is very special,” she said. “I’m a mother who really appreciates it.”

Miller’s plea was recently sent to the American Academy of Neonatal Nursing asking for the pacifiers to be more widely available.

About Winnie Palmer Hospital for Women & Babies: Winnie Palmer Hospital for Women & Babies, supported by the Arnold Palmer Medical Center Foundation, is a 315-bed facility dedicated exclusively to the needs of women and babies. As part of Arnold Palmer Medical Center, the hospital is Magnet®-designated for its commitment to quality patient care, safety, research, and service excellence. It is a leader in neonatal intensive care, and comprehensive healthcare for women throughout all stages of life, providing a wide range of services in obstetric and gynecologic care. Winnie Palmer Hospital has been recognized as an Academic Center of Excellence in minimally invasive surgery. Its highly-trained physicians utilize the most advanced technology to effectively treat the vast majority of gynecologic conditions with fewer complications and faster recoveries. The hospital also includes comprehensive fetal diagnostics, labor and delivery services, maternal intensive care, and the largest center for neonatal intensive care in the world. Annually, more than 13,000 babies are expected to be born at Winnie Palmer Hospital, making it one of the busiest in the country. The hospital also ranks in the top 10 percent nationally for patient satisfaction. To learn more, visit www.winniepalmerhospital.com or www.accordingtowinnie.com. 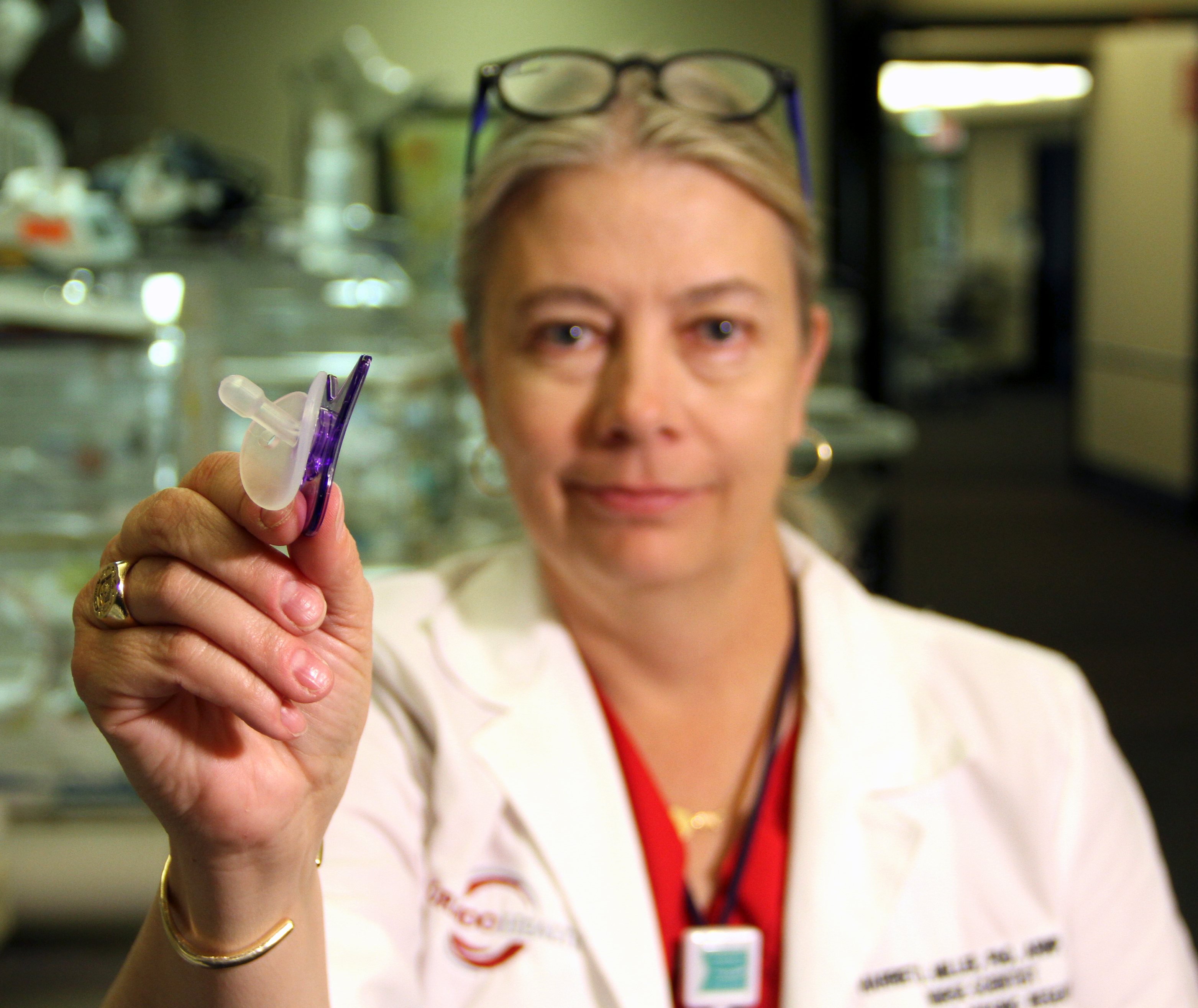 Nurse Harriet Miller, PhD, shows the pacifier she developed specifically for preemies. Miller was bothered by the fact that most preemies in her care couldn`t have pacifiers due to tubes in their mouths that help them breathe and eat. So, she developed a specialized `preemie pacifier` and a study at Winnie Palmer Hospital for Women and Babies proves it works. Details here: bit.ly/1DPYsJf 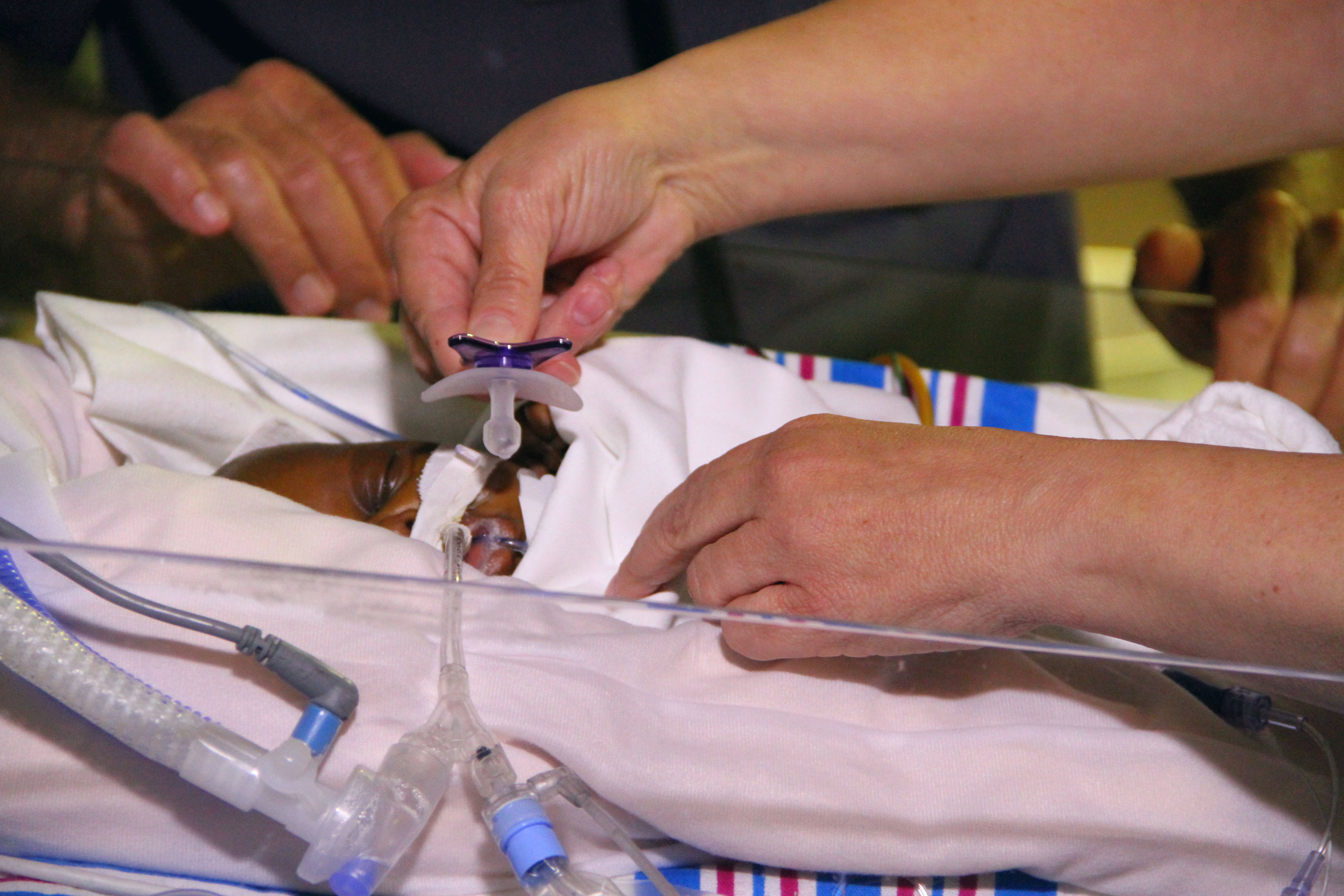 A results out of Winnie Palmer Hospital for Women and Babies in Orlando shows that a pacifier developed specifically for preemies has significant health benefits. Because most preemies need tubes in their throats to help them breathe and eat, most can not use a traditional pacifier, but they can use this specially designed version. Click here to see how effective it is for these tiny babies: bit.ly/1DPYsJf

Nurse Harriet Miller, PhD, gives a preemie a specially designed pacifier at Winnie Palmer Hospital for Women and Babies in Orlando. Miller developed the pacifier for premature babies, most of whom can not use traditional pacifiers because of tubes placed in their throats that help breathe and eat. See how well the pacifiers work here: bit.ly/1DPYsJf 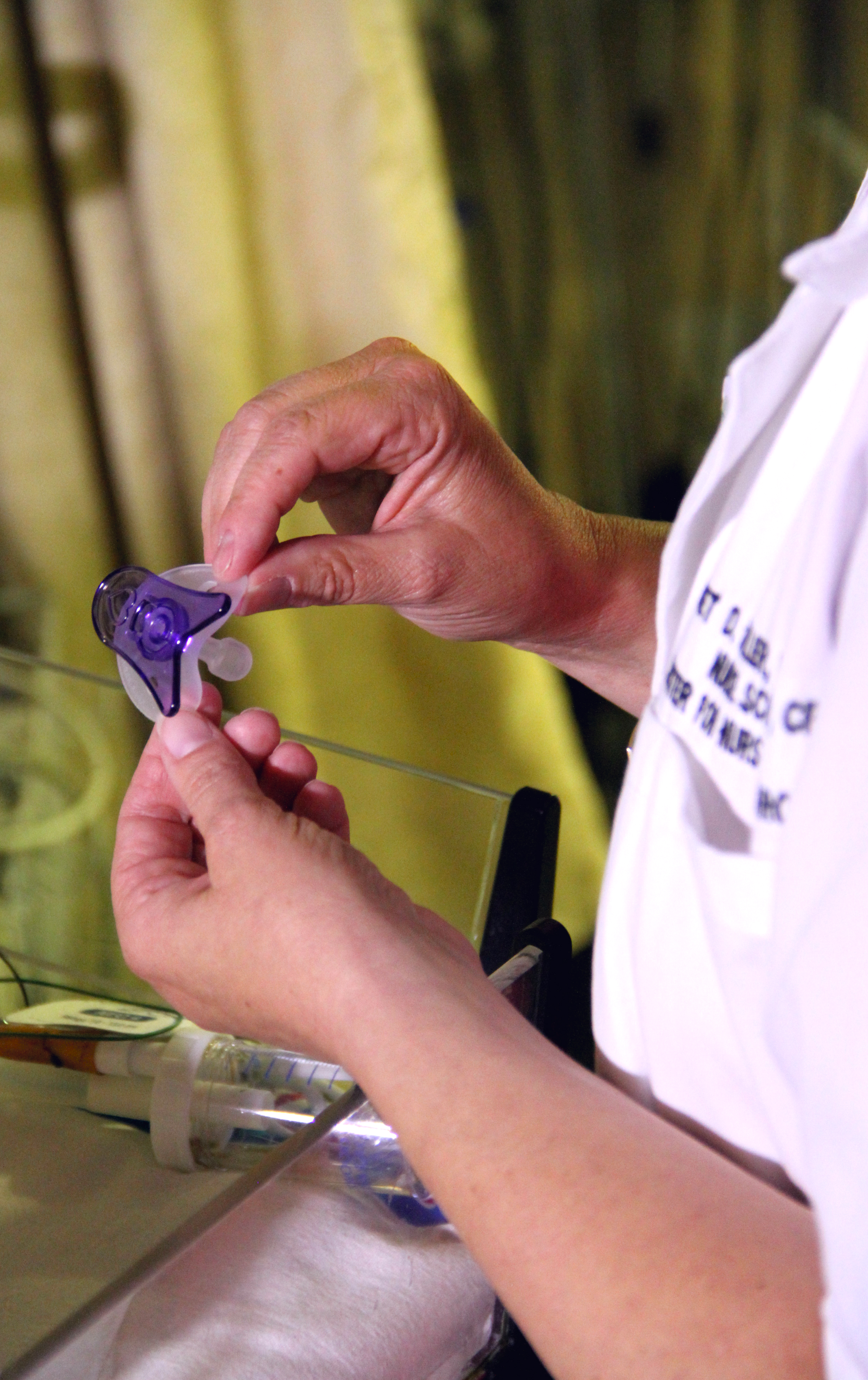 A specialized pacifier, developed by a nurse at Winnie Palmer Hospital for Women and Babies in Orlando, is proving to have huge health benefits for the tiniest of patients. Most preemies can not use traditional pacifiers because of tubes that are placed in their throats that help them breathe and eat. This pacifier not only works in preemies, but has been shown to lower blood pressure, reduce heart rate and significantly ease pain. See how it works here: bit.ly/1DPYsJf 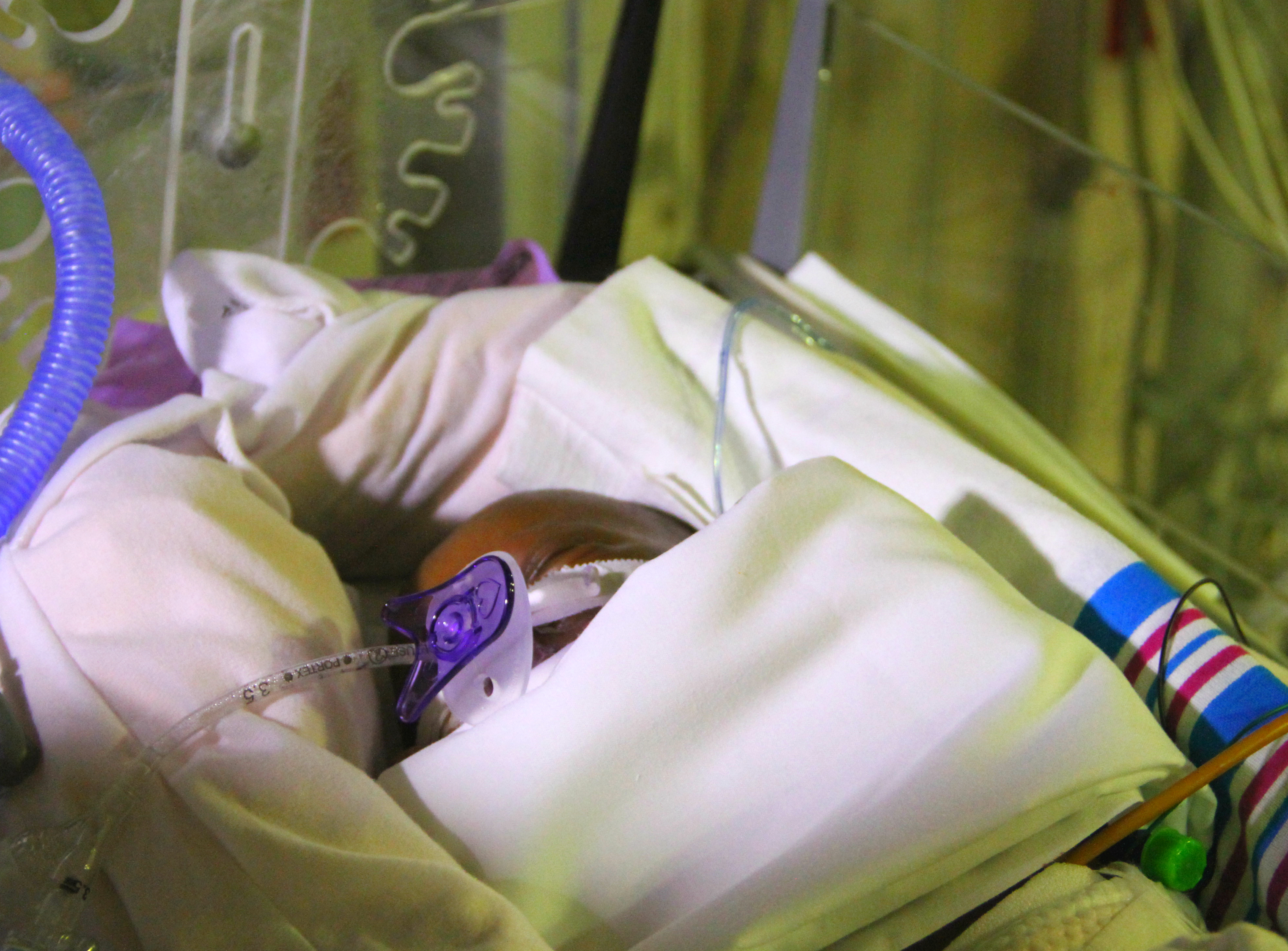 A premature baby sleeps with a specially designed pacifier at Winnie Palmer Hospital for Women and Babies in Orlando. Most preemies need to have tubes placed in their throats to help them breathe and eat, which makes using traditional pacifiers impossible. But thanks to the development of this pacifier, preemies are happier and healthier. Meet the nurse who came up with the design of the pacifier here: bit.ly/1DPYsJf 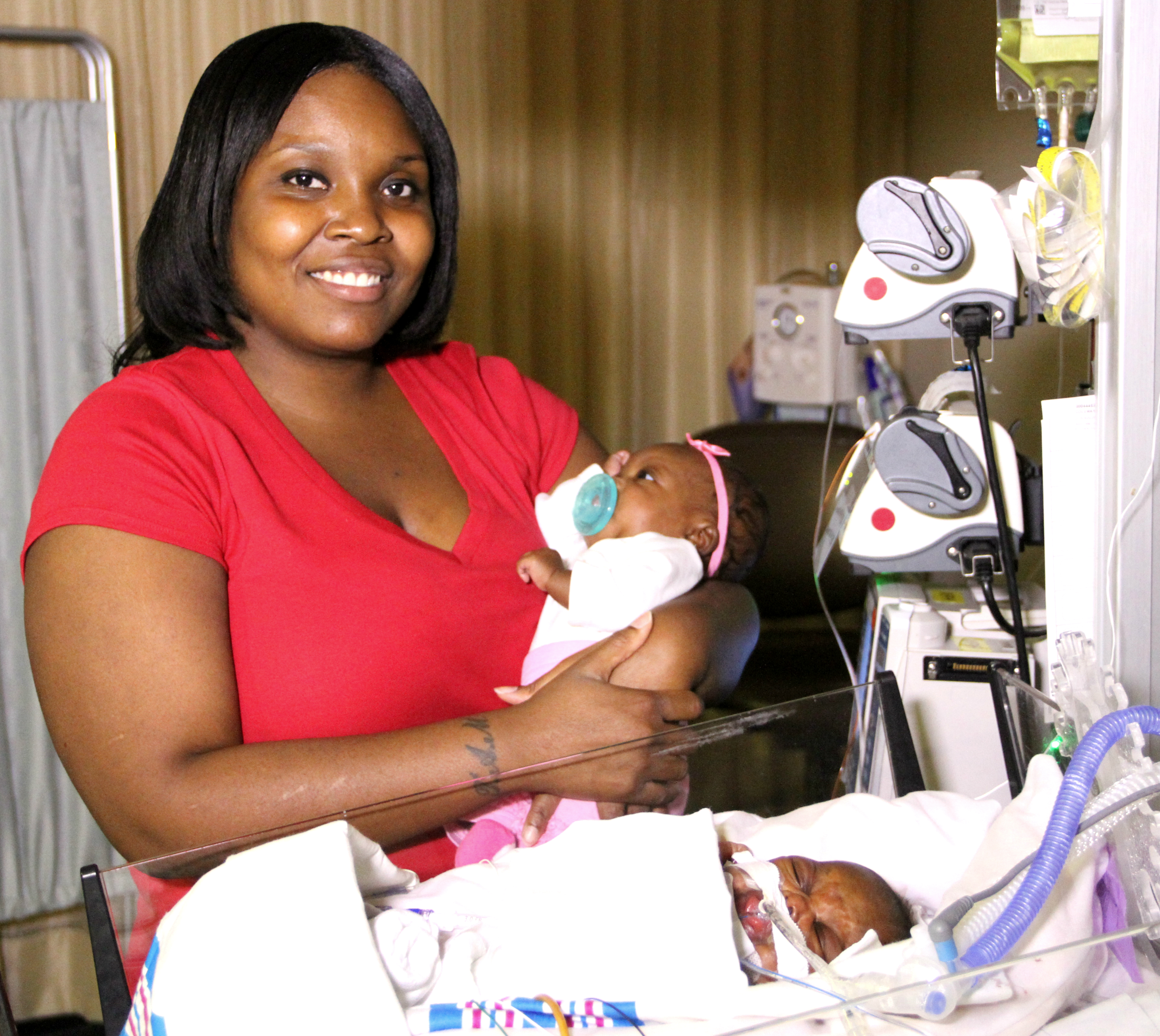 Amber Eady, a mother prematures twins, says both of her babies respond almost immediately to the soothing power of the pacifier. One of her babies went home earlier than the other and was able to use a traditional pacifier. Her other child, however, had to spend weeks in the hospital and needed tubes in her throat to help her breath and eat. Those tubes normally prevent babies from being able to use a pacifier, but thanks to a special preemie pacifier develope by a nurse at Winnie Palmer Hospital for Women and Babies in Orlando, both her babies are happier and healthier. See how the preemie pacifier works, here: bit.ly/1DPYsJf

Your file is downloading.